The Abortion Cataclysm: Picket in Front of the Death Camps 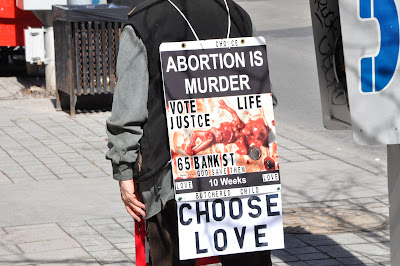 History has known one slaughterous ideology after another. Meanwhile, the media dithers on about how wonderful abortion is.

Abortioneering can even be seen in the sight of the Confederation Building next to the Parliament of Ottawa, where this photo was taken.

The saintly man you see in the photo prays here each day in this wind tunnel on Ottawa's favorite street, Bank St.

Pro-abortionism is strong in Canada thanks in large part to the state-controlled media, a story that will never be told because it is axiomatic that the press controls the press.

Pray and do penance for this abortuary to close.

Abortions are the most egregious medical mistakes of all.

And pray, too, for the covey of doctors who are drunkards, sex deviates, mafia satellites, sadists and assorted incompetents.
at 10:16 AM