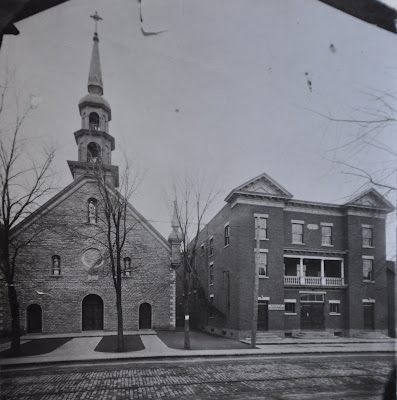 Church of Sainte-Anne, seen back in the day.

Yours truly came across this rare photo at the city archives.

Next to the historic church can be seen the old parish hall, since torn down.

In a diocesan book published in 1998, Planted by Flowing Water, we read, "This hall became the meeting place of French Canadians for more than a century." Further, of the rectory, we read, "His large presbytery frequently served as the meeting place of the French-Canadian religious and lay elite of the day." And, "Each year, well-known speakers led the Lenten retreat." The same book describes the stained glass windows in the church as, "among the most beautiful in Canada."

This year, by the grace of God, the nearby FSSP parish of St. Clement will be moving here, to this fine new location. Sadly, the old parish hall was demolished in the 1960s, along with the entire neighborhood, thanks to a vast urban development project of the then city planners, who gambled in a quick bid to "renew" the city's oldest neighborhood, and failed by all accounts.

St. Clement's, until 1984, celebrated Mass in the chapel of the Sisters of the Monastery of the Precious Blood, on Echo Drive. In 1984, they moved into a church on Albion Road, Gloucester, and in 1993 the community moved to its present location, the former parish of St. Pius X, a modern church located on Mann Ave.

We all look forward to the move and thank His Grace, the Archbishop of Ottawa, for His generosity and paternal solicitude.
at 11:26 AM