Cohors Helvetica and a Word about Vatican Security 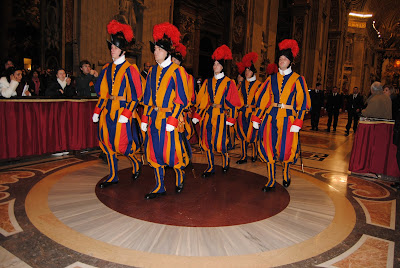 The enfolding arms of the Bernini colonnades welcome all, into a safe place known as St. Peter's Basilica.

And there at the Papal Masses you have the most colorful military unit in the world, the Swiss Guard. For the most part these guys do fine work and act as an able bulwark in protecting the popes and others.

On the other hand, there is the Corpo della Gendarmeria, whose members are Italian nationals. They are the private security detail of the pope (along with some of the Swiss Guard), who assist at some few other functions as well. Fat with nepotism, they have always been quite definitely in second place. The brass are older men who are wise in the ways of preserving themselves in power and they are most of the names on the Vatican Comitato per La Sicurezza and are the Direzione dei Servizi di Sicurezza e "Protezione Civile".

Everybody has seen the newsreel of the attack on the pope. What is not seen in the video is that after the girl was taken down (and subsequently took down the pope), she then got up ( = got away) and ran down the center aisle through waves of the security cavalcade and only then plowed into the 87-year-old cardinal about half way down the center aisle at which point the Gendarmeria security was (finally) able to stop her (only after she plowed into the cardinal) and carry her out (near the manger scene).

A lack of able security is akin to touching pitch. And this blessed obliviousness of the Gendarmeria has proven dangerous. The careless and carefree bonhomie of the Corpo della Gendarmeria only makes it clear that change needs to be in the air and that the return of the sedia gestatoria, which many are still against, might just be the smartest solution.
at 3:39 AM