From the Vatican: What the Catholic Bride Looks Like 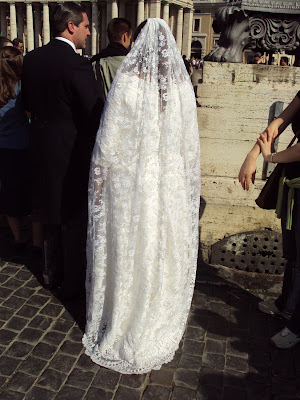 She is veiled, and wears a modest gown.

As Catholics we have standards of modesty in dress.  Tough if you don't like it.

This is especially true for the Catholic bride who stands before the community in an official capacity during the Marriage Service and the Nuptial Mass.

The bridal pair are themselves the ministers of Holy Matrimony.

As many girls of today sometimes complain, it is just about impossible to shop for a new wedding dress which meets Catholic standards of modesty.

Both my grandmothers were married during the Great Depression, were dirt poor and just wore their Sunday best, with no fancy white gown.  Mom was raised by nuns and made her own modest wedding and bridal party gowns.

If a pastor I would refuse in marriage prep to marry a bride dressed with exposed shoulders and/or a strapless gown.