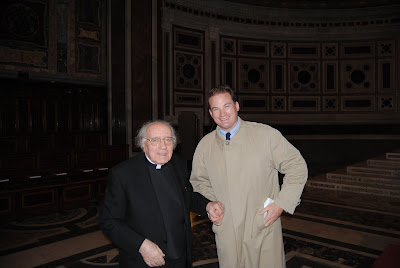 One of the very, very last Rome legends.

Kissing his right hand and thanking him for his wonderful labors was a great honor this evening inside the sanctuary of the Lateran Archbasilica.

He is called by everybody "maestro" and to chat with "maestro" was a real treat.  He's one of the nicest guys.  Just really happy.  Smiles and laughs and makes jokes.  He shines.  And he is a professional.  A legend (he is the greatest living interpreter of the Roman school of polyphony).

Meet Mons. Domenico Bartolucci, the greatest living Catholic Church musician on the planet earth.  His passion is simple: la polifonia della scuola romana.  And he is really good at it.  He is proud that the great musical patrimony of the West was originally sacred music and remains sacred music.  The polyphony of the Roman school and organ music are his great loves.

Maestro is venerable in age.  He was born the same year as President Kennedy, 1917.  He was appointed by Pius XII in 1956 as director for life of the hallowed Sistine Choir (until 1997 when an usurper ended that).  He used to direct the music of the old papal liturgies back in the good old days, and during the Vatican Council.

His Italian is beautiful to hear, it's Florentine.  He was ordained priest in 1939 at the age of 22.  In 1942 he moved to Rome and in 1952 with the help of Don Lorenzo Perosi he became the Vice Maestro of the Cappella Sistina.  When Perosi died in 1956 Pius XII made him the Direttore Perpetuo della Sistina.

In 2003 was founded in Rome La Fondazione Domenico Bartolucci e il Coro Polifonico.  Now the true Direttore Perpetuo della Cappella Musicale Pontificia Sistina is back in business and treating the new generation to this rich and timeless musical treasure.