Why St. Josemaria Did Not Celebrate the Novus Ordo Missae 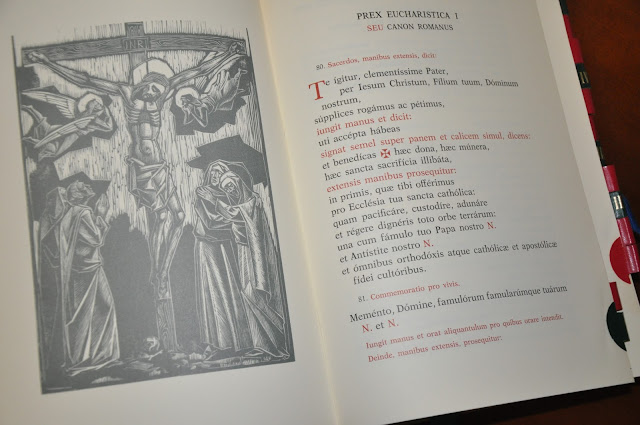 A few years ago I had the honor to sit down with the great Rev. Dr. Giuseppe Soria, personal physician of St. Josemaria Escriva.

Don Giuseppe was a close and personal friend of the saint, and was even in the room the moment the saint breathed his last.  In fact, he is the one who reached out and closed St. Josemaria's eyes the moment after he passed.  Don Giuseppe was ordained in Madrid and lived in Rome in the 1950s, '60s and '70s.

I asked Don Giuseppe why St. Josemaria had not celebrated the NO Missae.  His response was frank and to the point.

St. Josemaria was always first and foremost obedient.  But he could not read the faded print in the new addition of the Roman Missal (see photo).  He had cataracts and found it difficult and painful to read the poor quality typeset.

Also, the saint had experienced certain mystical moments associated with particular words, sentences and structural parts of the Extraordinary Form of the Roman rite.  Such moments had been a part of his spiritual life since boyhood and through his priesthood.  In having to celebrate the Mass of Paul VI, the saint would have been cut off from this.

Finally, it was the saint's secretary, Don Alvaro del Portillo, who at the behest of the saint telephoned Mons. Annibale Bugnini to ask permission to continue celebrating the Classical Rite.  Monsignor Bugnini was quick in his response: "You don't need permission from me.  Just continue to celebrate the Mass of St. Pius V."
at 5:28 PM