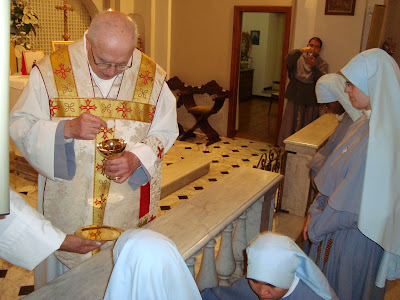 He received his First Holy Communion from Padre Pio in 1938.  The closest thing to a mystic you might ever meet.  His whole family are saints.  Amazing people.  I love spending time with them.

We stand in support of Padre Stefano and his Congregatio Fratrum Franciscanorum Immaculatae.  He has simply sought the spirituality of St. Padre Pio, St, Max Kolbe and St. Francis of Assisi.

When the good guys are persecuted by the Curia it often follows the same pattern: a calumnious petition against a good guy sent to the Holy Office.  Filed by some abdominable colleague and followed by a humiliating scolding and an even more humiliating punishment.  The same things happened to (St.) Padre Pio himself.  Being called ad pedes (to give account after being attacked and maligned).  Being sided against.  But this comes with the territory.  The tough road to sanctity.  Being purified.  Obedience to the Church is supreme.  At the word "Church" Padre Pio often bowed in a devout manner.  He once said: "First the Church and then I will take into consideration Its ingenious ruiners or constructors."  Our Lady will sort this one out.