Ottawa: New Mosque and Bishop Sheen on the Conversion of Moslems 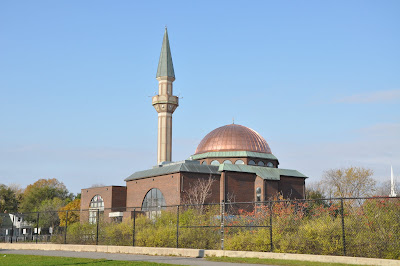 "Traveling in Moslem countries as well as Moslem parts of Africa again brought me face to face with the role of Christianity. The Moslems are firm believers in God. Indeed, they have rejected Christ, Whom they consider a prophet announcing Mohammed. But this may be partly due to the scandal in those countries of warring theologians as they disputed the Trinity and the Hypostatic Union. Mohammed led the people out of those conflicts and out of polytheism into a recognition of the absolute sovereignty of God. It is to the credit of these people that they are prayerful; it may be there is more prayer to God in the Moslem world than there is in the post-Christian civilization of the Western world. Here we are not speaking of the judgment or quality of prayer but merely the number of people who, at least five times a day, bow down to God. I recall taking a bus trip to Cairo to the pyramids. At one of the appointed hours of prayer the bus driver stopped his bus, took his prayer rug out to the sand, knelt down upon it and made his obeisance to the Almighty.

A deep spiritual bond exists between Christians, Moslems and Jews, for as Pope Pius XII said, all Christians are 'spiritual Semites' because we are descended spiritually from Abraham. The Moslems trace their genealogy, however, through Ishmael and not Isaac. In addition to having Abraham as a father, they also have a devotion to the Blessed Mother. The nineteenth chapter of the Koran, I discovered, has forty-one verses on the Blessed Mother. They believe in original sin, and have a vague concept of the Immaculate Conception. I often wonder if there is any connection between the revelation of Our Lady at Fatima and the ultimate conversion of the Moslems. Why did the Blessed Mother choose a tiny, insignificant village like Fatima so that she might be called Our Lady of Fatima? The daughter of Mohammed bore the name of Fatima. Writing after her death, Mohammed noted: 'Fatima is the most holy of all women in paradise next to Mary.' The Moslems occupied Portugal for centuries. When they were finally driven out, the Moslem chief in that locality had a beautiful daughter by the name of Fatima. A Catholic boy fell in love with her. She not only stayed behind when the Moslems left but even embraced the Faith and became a Catholic. Her young husband changed the name of the town where he lived to Fatima. Thus, the place where Our Lady appeared in 1917 has a historical connection with Fatima, the daughter of Mohammed."