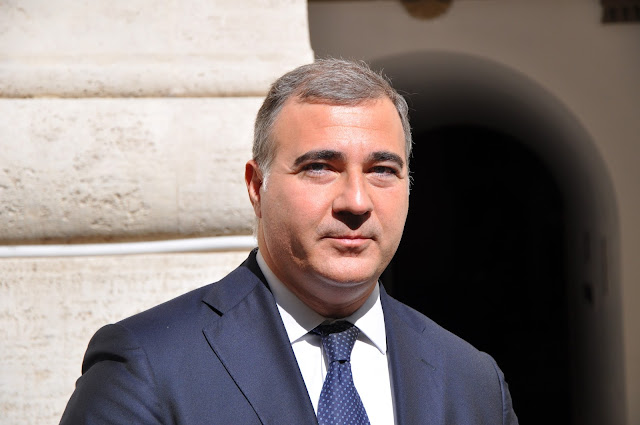 An enormous loss for the Traditional Mass community in Rome.

Fabio Bernabei, a Catholic journalist and essayist, born in Rome, has passed away.

Fabio was a stellar Catholic layman.  He was very involved on many fronts for the restoration of Christian civilization.  He always had a smile and his face beamed with light.   His anchor was the splendor and spirituality of the Roman rite in its classical form.

Fabio, a son of Rome, labored tirelessly in the Eternal City to help reach people with the good news of the Gospel.  I wish more Roman laymen could be like him.  He was a light and an inspiration to all he met through his work and travels.  He never missed a Sunday Mass.

Perhaps Fabio will be most remembered for his time as the president of  the very excellent Roman organization, Centro Culturale Lepanto.  He was also heavily involved in anti-drug campaigns, doing all he could to bring people the peace of Christ and His Church.

I will always remember fondly the excellent events that Fabio hosted through the Centro Culturale Lepanto.  The venues were perfect.  I remember one such lecture held in an old Roman palace on the Aventine Hill, which gave rare access to such gardens and history.

For many years I saw Fabio every Sunday morning making his way to early Mass in the Extraordinary Form at San Gregorio dei Muratori and later at Santissima Trinita.  He always carried his prayer book with him.

This photo was taken of Fabio after morning Mass outside the crypt of the Vatican Basilica.  His presence will be missed for a lifetime to come.

Remembering Fabio and his legacy brings to mind the words of Christ in the Gospel of John when He said: FATHER, MAKE THY NAME KNOWN (John 12:28)!

Dearest Fabio, may your memory be eternal.  In Paradisum!
at 3:05 PM