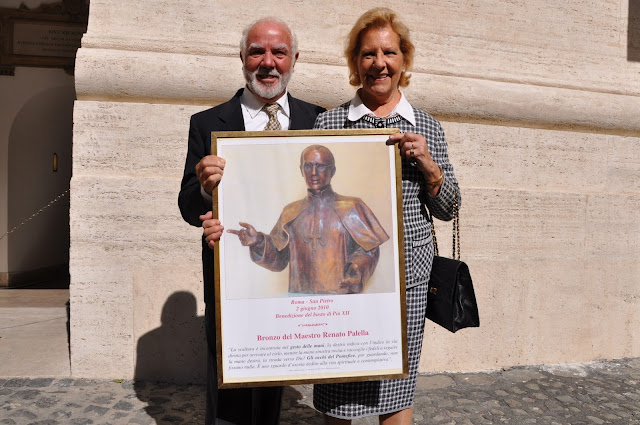 To Renato Palella, Catholic sculptor, who in his lifetime took his place among the immortals, and whom I was blessed to call my friend.

Renato was also my landlord.  I miss him.  I can still hear him calling me: "Gianni!"

For my wedding, Renato knocked on my door with a bouquet of flowers.  He was a Sicilian and had a big heart.

Renato often recalled looking up in the sky at the Allied bombers during the Second World War.  The first Americans he met were the Allied soldiers who liberated the island fortress.  He was delighted to have me and my new bride rent his newly renovated seaside flat/artists studio (truth be told, we think it had been an old boat house).

Renato was a very dedicated and kind man.  His character and personality were lovely.  His candor and tenacious loyalty to the cause of Venerable Pius XII will always be remembered.

His relish of life and of family and friends, as well as his delight in the senses and in art and nature were very Italian qualities.

One of my best memories was when he hosted us, the newlyweds, on the rooftop terrace of his seaside villa, under the pergola, overlooking the Odescalchi Castle in Santa Marinella.  He complained of the filthy vulgarity in movies today, which he rightly said had been responsible for the filthy vulgarity that has now become accepted commonplace in movies and real life.

His wife was from Rome and grew up under the shadow of the Vatican during the election and papacy of Pius XII, educated by the Daughters of Charity.

Those were the days when the picturesque starched cornette-wearing sisters were seen daily milling about St. Peter's Square and strolling around the neighborhood of the Vatican.  The sisters wore the most conspicuous religious habit the world had ever seen, eliminated in 1964.