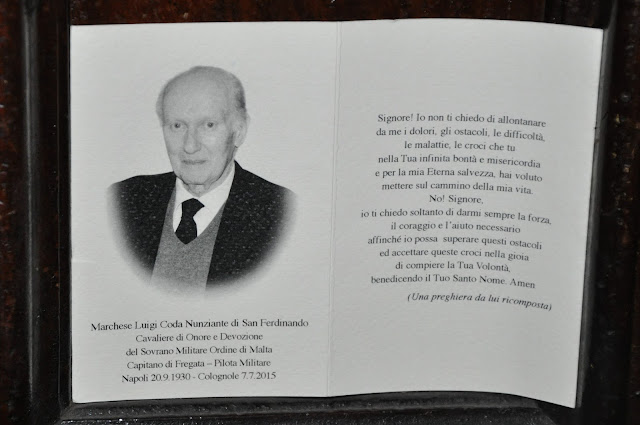 Since his passing nearly a year ago, I have been without words to describe the loss for the Traditional Mass community in Rome.

The Marquis was a giant in the forest.

Of the Roman nobility, he was a fierce lay pillar of the Latin Mass movement in Rome.

A model Catholic aristocrat.  A father of five.  A veteran of the Italian Armed Forces.  He loved the Roman rite and all things Catholic.

I saw him every Sunday for many years at the celebration of the Extraordinary Form of the Roman rite in Rome and the Vatican.  Countless times I observed him in prayer at the Gesu' e Maria, San Gregorio dei Muratori or at Ss. Trinita.'

He was extremely devoted.  He could be seen Sunday mornings strolling to church wearing his fedora, with his hand missal and rosary, walking arm in arm with his sweet wife, Gabriella.

A saint has walked in our midst and passed before us.

Luigi, thank you for your many acts of kindness and for what you taught us in your fidelity as a model Catholic layman.  I will forever see you kneeling in the pew and beckoning us to do the same.