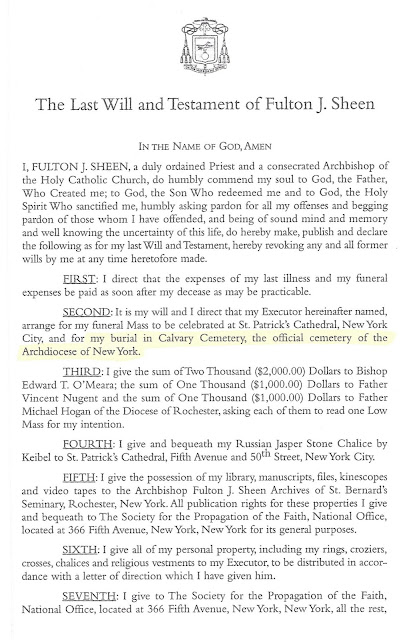 New York is the crossroads of the world.  It is America's premier city.  The Rome of the New World.

Would be nice to see Archbishop Sheen interred in a side altar of St. Patrick's Cathedral.

It has been unnecessarily difficult to view his tomb in the crypt underneath the sanctuary, which has been the root cause of some hostile feelings.

I can remember arriving at St. Patrick's the first time and asking around for directions to access the crypt where his tomb is located.  From the rectory a security guard walked me down through the sacristy into the crypt.  He waited for me upstairs.  I stood in awe before the mortal remains of some true ecclesial giants.

Once I drove through Peoria and stopped at the cathedral, hoping to see where Sheen was ordained.  The church was locked.  We had a schedule and kept driving.

Sheen's home in the end was New York.  He loved many places: Lourdes, Rome, the family farm he loathed in El Paso, St. Paul where he studied during WWI, Washington, D.C. where he taught.