Fr. Clarence Steiner of Nativity with His Family 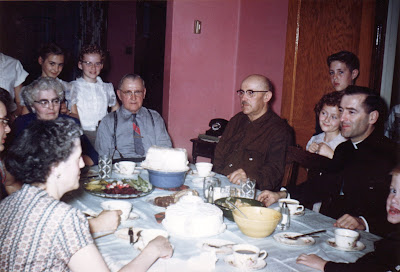 Monsignor Clarence J. Steiner is the priest who made me. He baptized me, became my weekly confessor, taught me the Faith - by his quiet, humble, silent example.

But by being present. And being faithful. He was holy. That's the simple secret. He was good at being a priest.

Priests today sometimes try too hard. With the jokes, smiles, talk of sports, throwing the football, trying to be ordinary just like everybody else. Wearing our clothes. Speaking like us.

Once at the baptism of one of my nephews in the 1990s, during the rite, the priest cracked lame jokes. A bit couth, eh? Not a good time for jokes, dude. The rite speaks for itself. Let it be.

Priests: you must remember - you never know what kid you are inspiring. That altar boy in the back row might be a future vocation. Always show holiness and reverence for the sacred. Kids don't always get this at home, but they can at least get it at church.

Just by your presence, you inspire. You must be holy because the kids will see this in you or not see it in you. The faithful will never expect you to be a canonized saint, but they will expect you to be nice.

Once when I was praying alone in church as a kid Monsignor came over and said hello. In that moment this simple gesture meant the world to me. Just think of the enormous amount of good a priest does when he is just nice. When he just says hello. When he makes intercession for the faithful under his care.

His passion was to hear confessions. He would do this for many hours. I have never in my life seen a priest who would hear confessions for so many long hours. And he was always a lamb in the confessional. I went to confession to him many hundreds of times. Every Saturday. He must have known it was me, but never let on - he gave me the right to be anonymous. He would always say the same thing: "God's grace has brought you here." Those words ring in my ears today. Mercy.

In the hundreds of times I went to confession to him, his voice wavered only once. He was always the same gentle lamb, with no exceptions, week after week. Except this one time when I heard the deepest pain in his voice after I had confessed anger at the pope, and bishops. With the deepest anguish, he responded. Since then I hold no animosity toward the popes living or deceased - their jobs are not fun and they suffer before all of us.

Monsignor Richard Schuler, personal friend of Monsignor Steiner, once served 14 years with him at the same parish, Nativity.

Monsignor Schuler, laughing, shared this story with me over pleasant dinner reminisces at the table of the St. Agnes rectory: "One time, when Clarence preached at Midnight Mass, he actually fell asleep during the sermon, he was so tired. In the pulpit while preaching! I was in the choir loft, watching. He had been hearing confessions for so many long hours that he actually fell asleep, standing in the pulpit."
at 11:54 AM