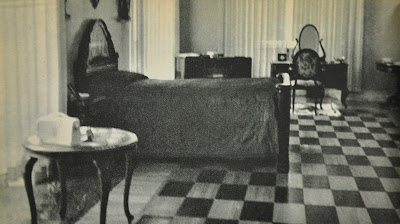 An extremely rare photo, taken in the 1950s by Dr. Riccardo Galeazzi-Lisi during the reign of Venerable Pius XII. This is the only known photograph of the papal bedroom - the corner room on the top floor of the Apostolic Palace. This room has been the bedroom of the popes since the year 1903. One other photo exists of this room, showing the bed of Pius X.

"The reign of simplicity was inaugurated by St. Pius X, who broke through Vatican etiquette when he showed no desire, upon being elected Pope in 1903, to leave the humble room which had been assigned to him for the Conclave. Stories are still told of his humility and simplicity. When the Vatican authorities realized that he would never consent to descend to the papal apartments on the second floor, they altered for him the top floor which has since been occupied by every succeeding Pope." -A Traveller in Rome by H.V. Morton, p. 356.
at 7:19 AM