Join Us on the Summorum Pontificum Pilgrimage to Rome 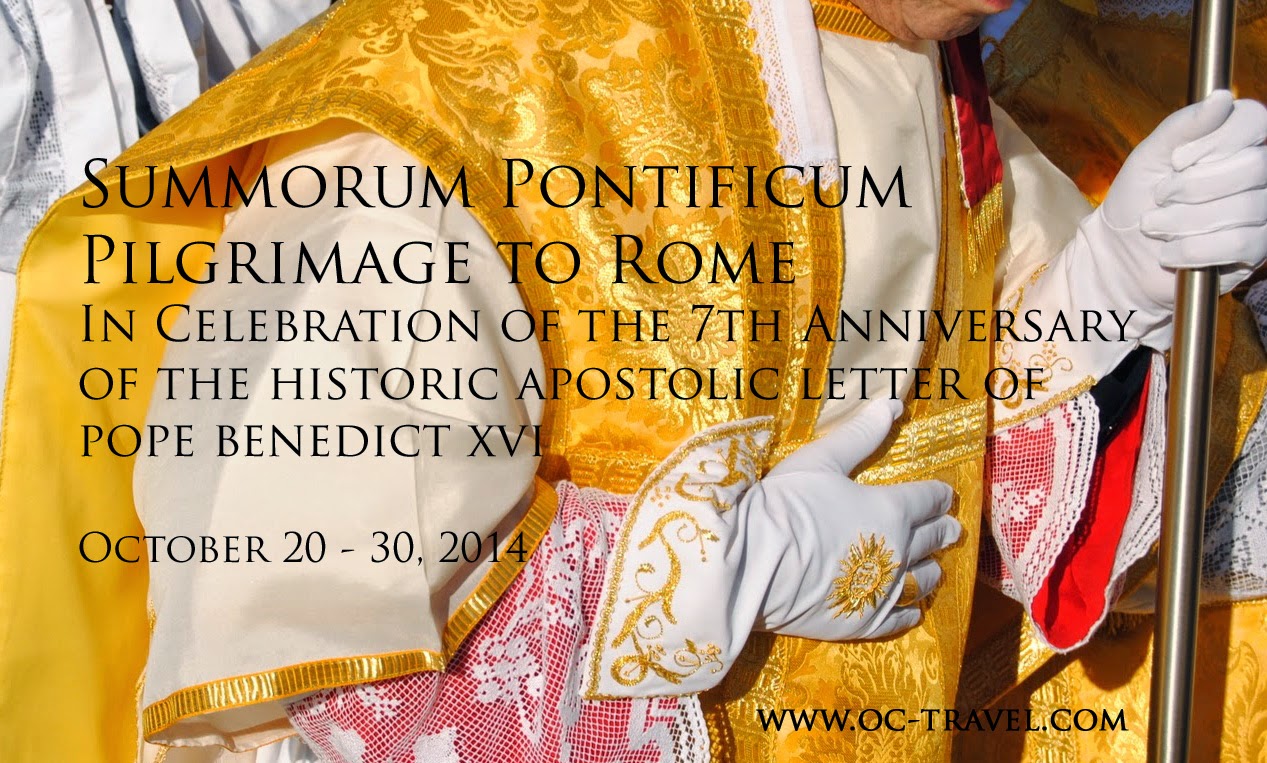 With Fr. John Zuhlsdorf, as chaplain.

We welcome those pilgrims seeking a truly Catholic tour.

Click here for the brochure and registration to reserve your spot: www.oc-travel.com.

This is an international event which will include Catholics from across the globe.

Join us on the 3rd Annual Summorum Pontificum international pilgrimage to Rome in gratitude for Pope Benedict's historic 2007 Apostolic Letter.  In conjunction, we will also be celebrating the 10th anniversary of the establishment of the international organization of Catholic youth, Juventutem.

Our pilgrimage is under the patronage of St. Agnes, Virgin and Martyr.

Hotel Ponte Sisto, centrally located in Rome, has been the property of the Pallottine Fathers for many years.  Opened in 2001 as a renovated hotel, this is where the future Pope St. John Paul II lived when he first arrived in Rome in 1946.  Located just a brisk walk from many Rome attractions, one can easily reach Trastevere, Largo Argentina, Piazza Navona, Piazza Farnese and Campo de’ Fiori.  It is situated across the street from the FSSP parish, Santissima Trinia’ dei Pellegrini on the Via dei Pettinari, 64.

To reserve your seat, download a brochure, read and fill out the application, and fax, e-mail, or send via post with $1,000 deposit to Orbis Catholicus Travel.

Arrive at Rome airport, meet our OC Travel escort, and depart by private motor coach to our hotel in Rome.  Check into hotel.  Enjoy the afternoon at leisure to take in the sights and sounds of the city.  Mass and special welcome dinner served with Roman delicacies and fine Italian wines.  Overnight in Rome.  (Dinner)

Papal General Audience in St. Peter’s Square.  The pope addresses all present with a brief catechesis.  The pilgrims from around the world greet him.  Concludes with Our Father in Latin and papal blessing.  Group lunch on the Borgo Pio.  Group “Scavi” Tour to see the tomb of St. Peter.  Overnight in Rome.  (Lunch)

Mass and breakfast.  Christian Rome open bus tour with stops at major religious sites of the city: St. Peter’s Basilica, the largest church in Christendom, and the tomb of St. Peter.  St. Mary Major, the largest shrine in Rome dedicated to the Blessed Virgin, and location of the reliquary of the manger crib from Bethlehem.  The Archbasilica of St. John Lateran, the former residence of the popes and cathedral church of Rome.  St. Paul’s Outside-the-Walls, which houses the tomb of St. Paul under its main altar.  Optional Solemn Vespers at FSSP parish at 7:15 p.m.  Overnight in Rome.

This morning, optional celebration of early Mass in St. Peter’s Basilica.  Visit the Vatican Museums and Sistine Chapel on a private guided tour, where you will view some of the most inspiring works of visual art, including Michelangelo’s magnificent frescos of the Last Judgement and Creation.  Break for lunch.  Afternoon is at your leisure for souvenir shopping or exploring on your own.  Pontifical Mass with Cardinal Pell at 6:30 p.m.  Overnight in Rome.

Mass, breakfast.  12:00 noon Solemn Pontifical High Mass at the altar of the chair in St. Peter’s Basilica with Leo Cardinal Burke.  Lunch in the neighborhood of the Vatican.  Free time to explore the pedestrian streets around the Vatican where there are various shops and cafes to taste the local food and drink.  Optional Rome by night walk at dusk to see the fountains and piazzas of the city.  Overnight in Rome.

Mass and breakfast.  Leisurely walk along the Tiber River to the Vatican for the papal audience.  At 12:00 noon the Holy Father will appear at the window of his private apartment.  He will give a brief catechesis and greet the crowds gathered in the square below.  He will pronounce the apostolic blessing.  Group lunch.  Optional leisurely afternoon relics walk through downtown Rome.  Dinner on our own and overnight in Rome.  (Lunch)

Mass, breakfast, day trip for a break from the city.  Departure for the striking hilltop city of Orvieto, located in the Umbrian hills north of Rome.  Enjoy the scenery while seeing the Roman countryside.  See and pray before the Eucharistic miracle from 1263, a corporal that a consecrated host once bled upon.  Lunch on our own in Orvieto to savor the regional cuisine with optional shopping time for pottery and regional wine.  Overnight in Rome.

After breakfast, private tour and Mass at the Catacombs of St. Priscila, which are among the finest and most important of Rome.  They originated in the second century and are part of a cemeterial complex, with a network of galleries that include what is believed to be the oldest image of the Blessed Virgin Mary, a fresco from the early 3rd century.  Lunch.  Group dinner in the Jewish ghetto.  Overnight in Rome.  (Dinner)

Mass, breakfast.  In the morning, a private guided tour of Ancient Rome which includes the Roman Forum and Coliseum.  See where early Christian martyrs perished.  Lunch on our own in the neighborhood of the Coliseum.  Celebratory farewell dinner in Rome.  Overnight in Rome.  (Dinner)

This morning, transfer to Rome airport for return flights home.