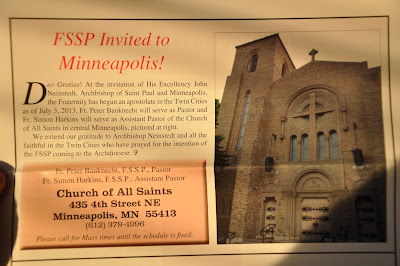 You can see the photos of the opening Mass here.

Their new site is here.

In AD 1680, the Recollect Franciscan, Father Louis Hennepin, at the suggestion of the Catholic explorer, La Salle, risked his life in order to find the source of the mighty Mississippi River; but especially for the purpose of carrying the light of the Gospel to the native Indian tribes, the  Sioux Nation, known to other tribes as emphatically "The Enemy."   In Minneapolis he celebrated the first Holy Mass, celebrated in the same "Extraordinary Form."

Today, the populous commercial center on the western bank of the upper Mississippi is known as Minneapolis.  A city founded by a Franciscan clergyman, a Catholic priest.  Father Hennepin, a member of the expedition of the Cavalier de la Salle simply found himself on a mission to explore the upper waters of the Mississippi and to bring the Gospel message to the nations.

He was the first white man to set foot on the soil which is now Minneapolis.  He discovered the cataract there, naming it Saint Anthony Falls after the patron saint of his expedition, St. Anthony of Padua.  Although it is no longer possible to look upon the wild and unrestrained grandeur of the scene which made such an impression upon him, that area has been the nucleus around which the life and history of the community has developed.  One of the main Minneapolis thoroughfares continues to pay tribute to his memory, as does the name of the county.  His Christian eyes were the first to behold the wonders of this northwest land.  And his Christian feet were the first to leave a mark in the soil upon which a great city was born.
at 12:14 PM