A Word About Modern Church Architecture 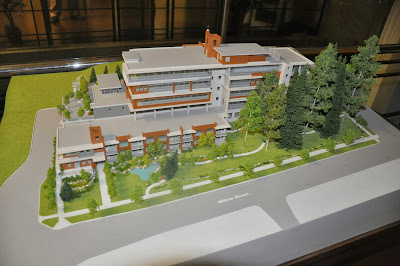 Of course cost is always a concern.  This was the winning bid.

A new megaplex chancery/curia/pastoral center for a North American archdiocese.

Although all is said and done, would have been nice to have seen a more Catholicesque plan.

Call me a dreamer, but my vote was for the Canadian Château Style.  A bit like what Opus has been building for the University of St. Thomas in St. Paul, Minnesota.  When builders are expected to fit their work into some pre-existing arrangement of unchangeable Catholic symbolism.

Unfortunately, we live in an age where buildings are understood primarily in terms of utility, and aesthetic constraints, while they are possible, are by no means necessary, in the builder's enterprise.

We live in the age of the functionalists. Their peculiar dogmatism speaks an unargued generality that has even often served to discredit their own conclusions.

Architecture, as many have pointed out, is the most political of the arts, in that it imposes a vision of man and his aims independently of any personal agreement on the part of those who live with it.  It would have been nice to have seen Catholic glory shining from this edifice.  Ordinarily, people are forced to confront the surrounding buildings they see, and to absorb from them whatever they contain of political or religious significance.

Just to see a new Catholic building structure worthy of the name Catholic - beauty and greatness not fallen into desuetude, but part of a living tradition.  It is still possible to compose like Beethoven or Brahms.  Tradition is a good thing.  It was for T. S. Elliot and so many others an ideal to be rediscovered by the modern consciousness, whatever the state of a person's imaginative understanding.

Such a building can stand as a visible symbol of historical continuity as well as the enforced announcement of something special - a special message.

"For the serious architect the past exists not as a legacy to be possessed through a self-conscious act of the 'modern' will, but as an enduring fact, an ineliminable part of an extended present.  From Vitruvius through the Renaissance to the Gothic revival, responses to architecture have been at one and the same time practical and backward-looking.  Even the architecture of the future envisaged by Ledoux was based on conceptions of architectural symbolism, and of architectural details, that are profoundly classicist in their inclinations.  And the pervasiveness of this respect for the past is only confirmed by the frequently somewhat hysterical nature of recent attempts to break with it."  -Roger Scruton
at 9:39 PM