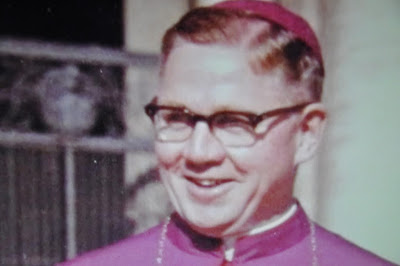 An image of Bishop James Patrick Shannon taken during the final session of the Council in St. Peter's Square.

His own bishop, Leo Binz, called him a heretic.  Archbishop Binz (Diocese of Saint Paul, USA), took the blame for his fall.  Binz was the one who promoted him to the sacred purple.  The poor Archbishop died of a broken heart in 1979.  Binz had been a Vatican careerist.  Shannon ran away with a mistress in 1968.

You can read the 1990s autobiography of this apostate bishop, Reluctant Dissenter.  Most frightening for me upon reading it was the realization of Bishop Shannon's penny catechism understanding of all things Catholic (sensus, theology, grace, etc.).  In addition, his broken understanding of the canons of the CIC (Code of Canon Law) becomes dangerously clear.  In retrospect, a bit of a revelation as to how poorly many of our clergy (and bishops) were educated at that time (as well as today).

He needs prayers.  Around the Holy Year 2000 he was privately received back into the Church through the good graces of Pope John Paul II, of blessed memory.  He died in 2003.

What you don't read in his autobiography is that he ran away with a thrice divorced woman, a Protestant.  She even showed up at his episcopal consecration.  And he doesn't tell you that Vatican II condemns contraception as well as conscience not properly formed by the Church.

Archbishop Sheen often lamented what eros has done to agape.  He was right.  And Sheen was right on his critique of Shannon's performance on TV.  You read of this in the autobiography.  This was too much for Shannon.  A lesson to be learned for us all on the corrupting effects of pride.

Maybe the priesthood for Bishop Shannon was about the color green, about writing witty columns, about being liked on campus.  About having an NPR voice, travels, big donors, all things Irish.  Those who knew him warned how he always wanted to be a bishop.  It was his lust.  Or at least one of them.  His father desired that he be a bishop.  His dad pushed him.  Many blame the dad (who had already passed away by the time Shannon left active ministry).

Pray for our clergy and bishops.  Both offices must be protected.  Integrity is an important thing.  And so is the glorious teaching office of Holy Mother Church, the Magisterium.  And the Sacrament of Confession.  And if you are an ordained priest struggling with purity, then I even suggest daily confession to form better habit for as long as it takes.

Let us pray for the living and the dead.  The Church is Jesus Christ and we stand on Her authority.  She does not error in Her teaching.