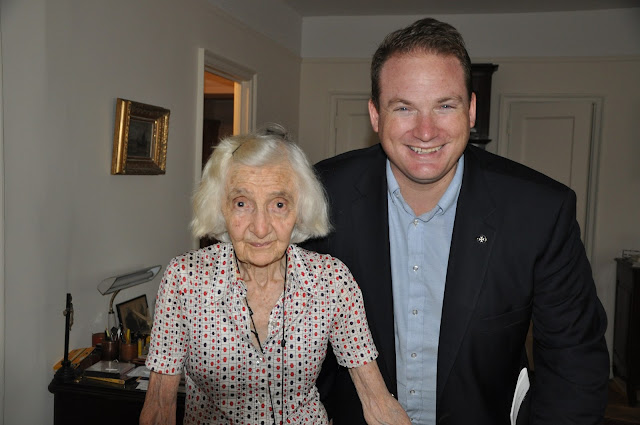 The greatest living female Catholic intellectual on the planet earth.

A living saint.  A bit like sitting down with St. Edith Stein.

There were two Dr. von Hildebrands and the intellectual scope, breath and depth of both is off the charts astounding.

It was a great privilege to visit her at her home where she lived with her late great husband, DVH, now entombed at Mt. Calvary Cemetery in White Plains, NY.

Dr. Alice has a very sharp and keen intellect.  And a very French sense of humor.  A lovely woman.  Indeed, she is the model Catholic woman.  She speaks five languages.  Her husband taught at Fordham for 19 years.  She taught night school for many years at Hunter College.

She explained that each morning she prays a rosary for Pope Francis.  She never did this before, but began this habit recently because popes need prayers, so clearly, especially today.  Four times she was received in audience by Pope Benedict, whom she is good friends with.  Dr. von Hildebrand has a great devotion to the Roman Pontiffs.  She was received in private audience by Paul VI in 1965.

Dr. von Hildebrand has traveled the world.  She left her native Belgium on the eve of war in 1940.

15 years after her husband fled Nazi terror in Europe, he went back to his homeland for a visit.  He had lost everything when he left Vienna to escape with his life.  In the 1950s, the two began to lead Catholic student tours to Europe during summer months.  "We led beautiful tours!" she recounts.

Some of the original itineraries have been kept and were recently rediscovered.  Hopefully we can recreate these tours and offer them to Catholic pilgrims of today.  To say the least, they were each very inspirational tours, led by giants.

Saints abound.  God is glorified in His saints.  Blessed be the Name of the Lord.  Now and forever.  Amen.
at 4:35 PM