What is Wrong with this Picture? 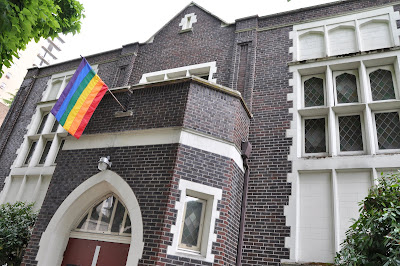 Last Sunday was the annual homosexualist parade in Vancouver. We need to begin to talk about these things and instruct our Christian youth on the truth of human freedom and sexual ethics.

Here are some words from JPII:

"Christ Himself linked freedom with the knowledge of the truth. You will know the truth and truth will make you free' (John 8:32). In my first encyclical I wrote in this regard:

'These words contain both a fundamental requirement and a warning: the requirement of an honest relationship with regard to truth as a condition for authentic freedom, and the warning to avoid every kind of illusory freedom, every superficial unilateral freedom, every freedom that fails to enter into the whole truth about man and the world' (Redemptor Hominis, 12)

Freedom can therefore never be construed without relation to the truth as revealed by Jesus Christ, and proposed by His Church, nor can it be seen as a pretext for moral anarchy, for every moral order must remain linked to truth.

St. Peter, in his first letter says: 'Live as free men, but do not use your freedom for malice' (1 Peter 2:16). No freedom can exist when it goes against man in what he is, or against man in his relationship to others and to God.

This is especially relevant when one considers the domain of human sexuality. Here, as in any other field, there can be no true freedom without respect for the truth regarding the nature of human sexuality and marriage.

In today's society, we see so many disturbing tendencies and so much laxity regarding the Christian view on sexuality that have all one thing in common: recourse to the concept of freedom to justify any behavior that is no longer consonant with the true moral order and the teaching of the Church.

Moral norms do not militate against the freedom of the person or the couple; on the contrary they exist precisely for that freedom, since they are given to ensure the right use of freedom.

Whoever refuses to accept these norms and to act accordingly, whoever seeks to liberate himself or herself from these norms, is not truly free.

Free indeed is the person who models his or her behavior in a responsible way according to the exigencies of the objective good.

What I have said here regards the whole of conjugal morality, but it applies as well to the priests with regard to the obligations of celibacy.

The cohesion of freedom and ethics has also its consequences for the pursuit of the common good in society and for the national independence which the Liberty Bell announced two centuries ago."