Superior General at the Council 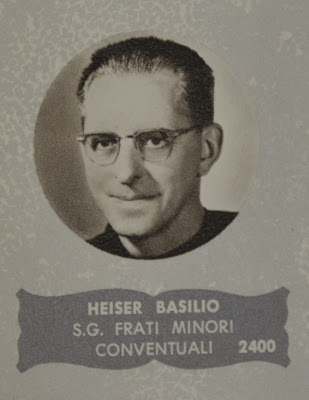 Yours truly will always remember the time when as a teenager I found myself at the train station in Assisi waiting for one of the last trains to Rome.

It was late and seated were two Romanian sisters with an elderly Franciscan, this brilliant and saintly man.

He introduced himself as Fr. Basil Heiser, an American priest from Indiana who lived in Rome.

We chatted the whole way back.  Such a learning experience.  He first moved to Rome in the 1930s and at the time of the Council was the Superior General of the Conventual Friars Minor.  Therefore, he was at the Council for all four sessions in his official capacity as the superior general of a very large and venerable religious congregation.

He was an eyewitness to history and had a lot to share.  God bless him.  He was in his nineties then.  He spoke of the great loss of tonsure.  We arrived in Rome and he got us a taxi at Termini.  Such a nice guy.  He invited us to visit XII Apostoli so that he could celebrate Holy Mass for us in Latin.

I love the holy priesthood of Jesus Christ.   I have been so formed by fine priests.  Rev. and dear Father, thank you for having taken the time to be nice, to say hello and to chat with me, just a kid.   You never know when you touch a soul.  Just light a match.
at 11:34 AM