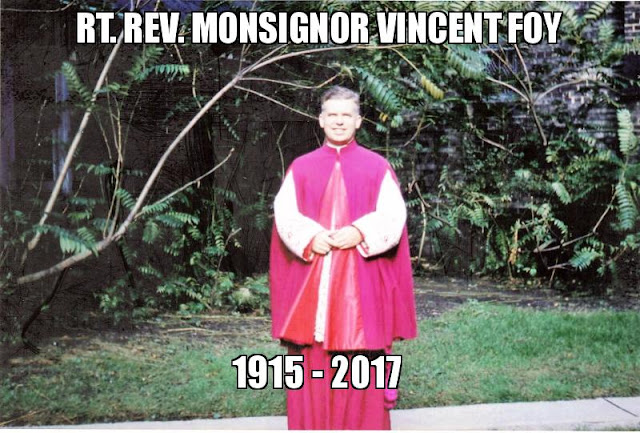 I trust the Archdiocese of Toronto will promote his cause for canonization.

From Wikipedia: "He has consistently written and taught on the intrinsic evil of artificial contraception, and strongly upheld Pope Paul VI's encyclical Humanae vitae when the Canadian Conference of Catholic Bishops issued the Winnipeg Statement."

"So he sounded the alarm, loudly and repeatedly, inveighing against the Winnipeg Statement and all its pomps and works. By the 1990s, one heard jokes that there was no subject — from divine revelation to recipe books — that Msgr. Foy could not relate to the Winnipeg Statement. His dogged fidelity prevailed, and in 2008, the Canadian bishops consigned the Winnipeg Statement to history with a new document celebrating Humanae Vitae’s 40th anniversary, Liberating Potential, which called upon Catholics to “discover or rediscover” the wisdom of Paul VI and the Church’s tradition."

"For decades he has fearlessly articulated and defended the teachings of the Church – in a time of moral and doctrinal chaos in the Church in Canada.  He is best known for his untiring defense of Catholic teachings on marriage and family life, Pope Paul VI’s encyclical Humanae vitae.  His efforts have earned him a papal commendation and the Pro-life Man of the Year Award."