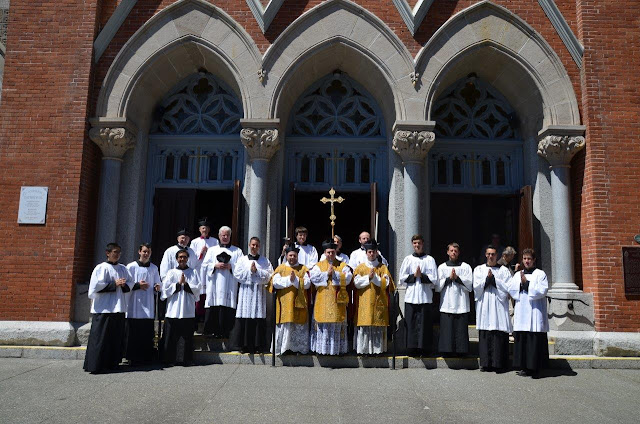 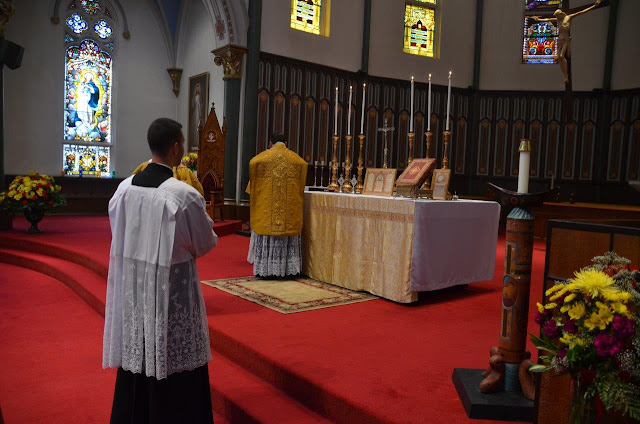 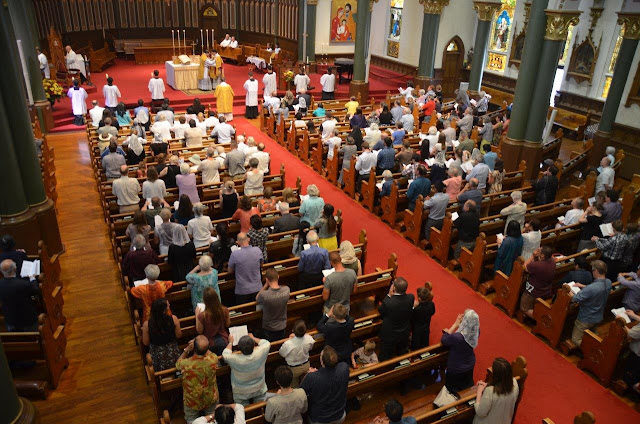 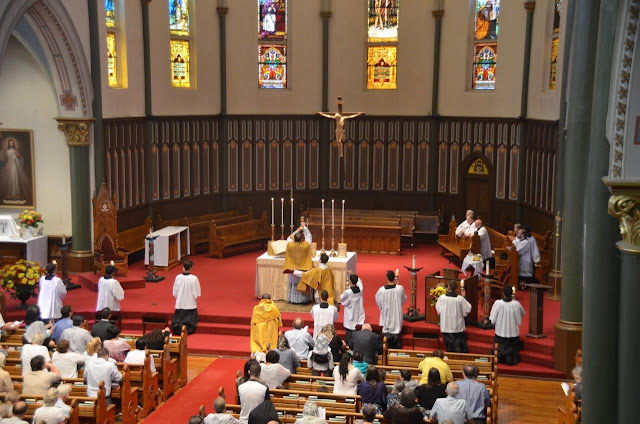 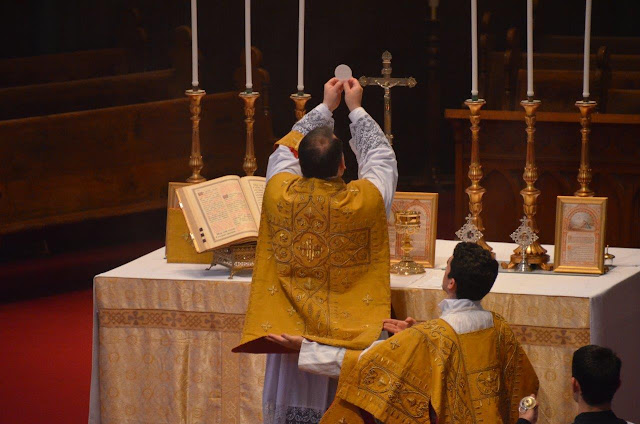 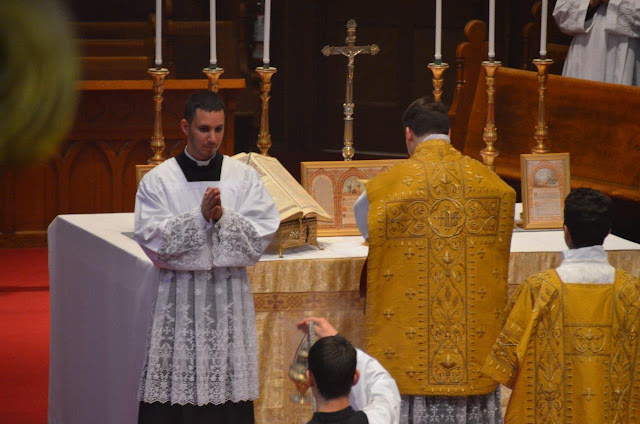 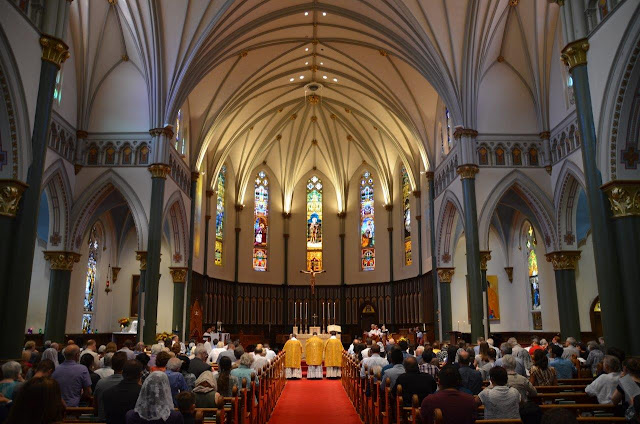 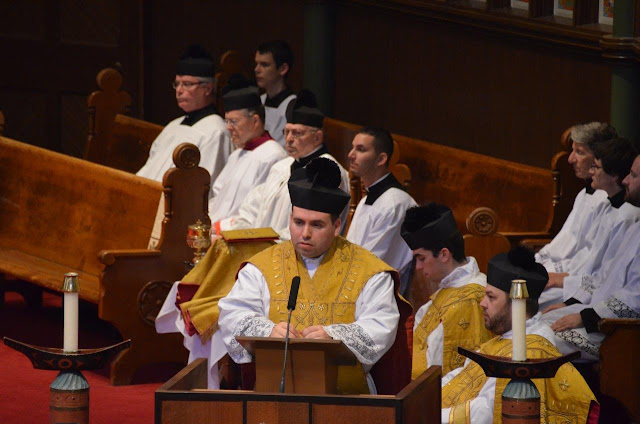 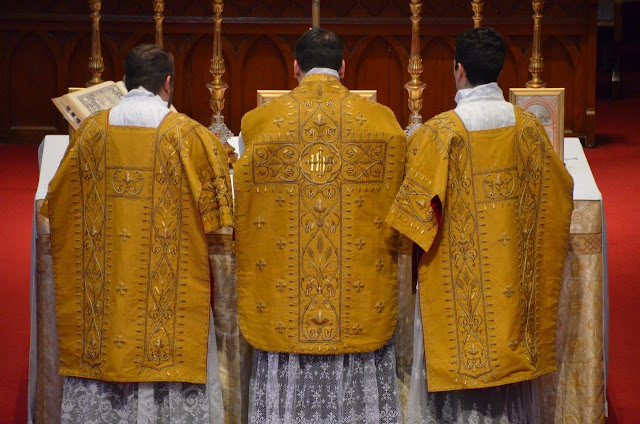 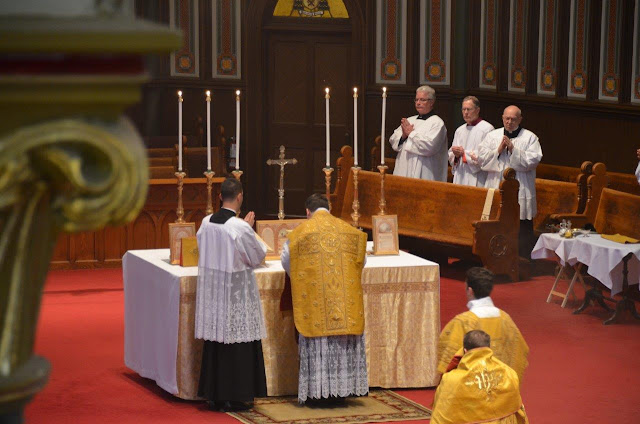 Soaring skyward with its bold array of colored brick, stone and slate, the Cathedral of St. Andrew in Victoria displays the confident spirituality that characterizes the best religious architecture in Canada.

The High Victorian Gothic style, an inspiration to generations of Canadians, was a fitting backdrop to sung Mass in the Classical rite on Saturday, June 24, a part of the Cathedral's 125 year celebration and Canada's 150 years.

Designed in the 1880s by Perrault and Mesnard of Montreal, St. Andrew’s was inspired by the medieval cathedrals of Europe, whose emphatic verticality and picturesque asymmetry greatly appealed to late nineteenth century architectural taste.

The port city of Victoria, resting on the edge of the North American continent, has the unique distinction of being one of the very last Episcopal Sees having been headed by a living Council Father.  Vatican Vatican Council II (1962-1965) was attended by Bishop Remi de Roo, who was appointed Bishop of the Diocese of Victoria in 1962 with a Vatican letter that began with the words, "Gaudio ex toto corde" ("I rejoice with all my heart").

For many of the participants of the packed church, it was their first experience of sung Mass in Latin. One young participant remarked: "This was my first time hearing Gregorian chant.    I am an illiterate in the worship of the Church.  The super-terrestrial, meditative and other-wordly aspects of the ceremony were a touch of heaven.  Thank you to all!"

Another exclaimed: "What a great way to renew culture!  A big defect in our age is a lack of reverence or even an experience of the sacred."

Another visiting musician remarked: "The Roman Church possesses a mature Christian musical culture, the core of which is the Roman rite sung in the Latin language.  The choir was terrific!"

Fifty years after the introduction of vernacular in the Roman liturgy, the question of the use of Latin in the liturgy is being judged in a different light by a new generation of canonists reading the original documents of Vatican II, the official text being in Latin.

According to the will of the Council itself, Article 36, #1 of the Constitution on the Sacred Liturgy, this principle is formulated: "Particular law remaining in force, the use of the Latin language is to be preserved in the Latin rites."  This sentence has imposed a command to preserve the Latin language in the liturgy.  In contrast to various translations produced under certain auspices at the time of the Council, it must be observed  that the official Vatican text of the document employs the subjunctive servetur and therefore expresses a command, not merely a recommendation.