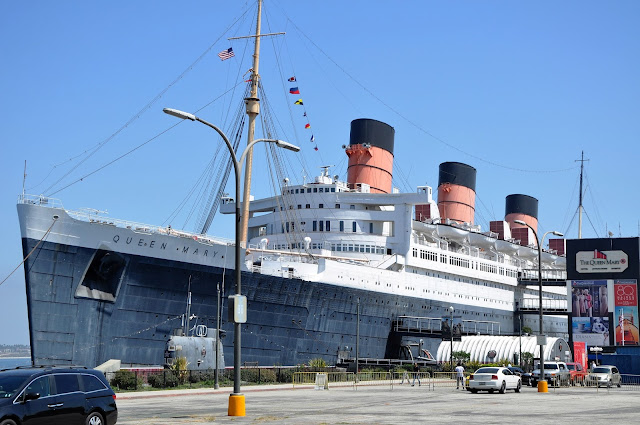 Yours truly was here, in a stateroom on the RMS Queen Mary, sicker than a dog.

This luxury liner, which crossed the North Atlantic over 1,000 times is today a hotel, museum and conference center located in Long Beach, Cali.  Staying here gives one the interesting vantage point of catching a rare glimpse of the golden age of superliner transatlantic travel.

It was a terrible night for me, spent most of the night on the floor of the Art Deco bathroom with a terrible vomiting spell.  This was the result of, we later learned, my almost bursting appendix, which was surgically removed days later.

The night before I had dinner with my mother in downtown Long Beach.  I remember it was a surreal evening.   Dusk on the ocean.  Navy men in their dress whites.  Twenty-four hours later, we were on the beach at Santa Monica, in a veritable state of shock.  Downtown Long Beach was shut down.

I was scheduled to fly out of LAX on 9-11.  As we approached the airport, we noticed the exit was blocked off.  We spent the day in Hollywood, visiting the homes of golden age stars, such as the Bel-Air home of Ronald Reagan (the Secret Service were keeping guard in a car) and the Beverly Hills home of Jimmy Stewart (which had sadly been torn down the year after he died).

I think I was the last person in the world to hear of the attack.  As I awoke I stumbled out of bed and made my way to the promenade deck and sun deck in search of my mother.  The ship was a maze and I found myself alone.  In a shop in the first-class Piccadilly Circus, a female employee had her TV on and said to me, "America has been attacked."
at 9:25 PM