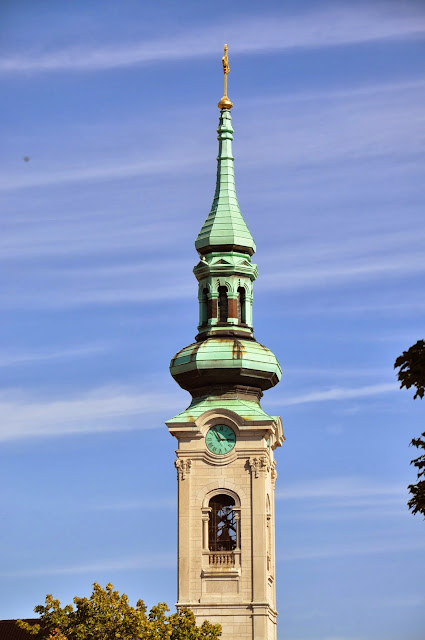 Austro-Hungarian fervor in the city named after the Apostle to the Gentiles.

The green onion dome with its crashing and pealing bells is a neighborhood and city landmark.  A symbol of spiritual regeneration.  The days of sturdy faith are here - enlightened and invigorated - at St. Agnes.

This is where yours truly received his formation.  Where I was taught the Roman rite.  Where I was taught to worship in the manner bequeathed to us by the Roman Church.  It is what we have envisaged heaven to be like: choristers, a pilgrim army, singing and shouting out in honor of the august Sacrament.  My preparation time here prepared me for Rome.

In high school I was privileged to climb up inside this same tower with friends.  It was a thrilling experience.

The pastor took me under his wing.  He prescribed rigorously the Roman rite to all youth he came into contact with.  He sought for young hearts to have a more sympathetic response to the Bread from Heaven, which "if any man eat of it he may not die."

His loves became our loves: the holy priesthood, the Roman rite, the Church's musical patrimony, the Apostolic See, the Mystical Body of Christ.  Monsignor R.J. Schuler, PhD.  A living legend.  His gift was to stir the faith.  To promote public demonstrations of reverence during a low ebb of eucharistic piety.  He was a spiritual father to many.

He loved us first.  We saw Christ in him.  He gave everything he had to the Church.  The last time I saw him I fought back the tears.  I feared it would be our last goodbye.  He was really good at being a priest.  To all priests and seminarians: be like him.  Follow his lead.  Be a good priest.  Light the match.  Be holy and happy.  Be normal.  Spend time with family.  Have balance.  Live the priesthood.  Be pure of heart.  Give all you have to the Church.  Be a gentleman and a prince among men.  Know and love prudence, obedience and oblation.  Priest AND Victim!

Axios! "[He is] worthy!" (an acclamation made by the faithful at the ordination of bishops, priests and deacons in the Byzantine rite).
at 7:39 PM