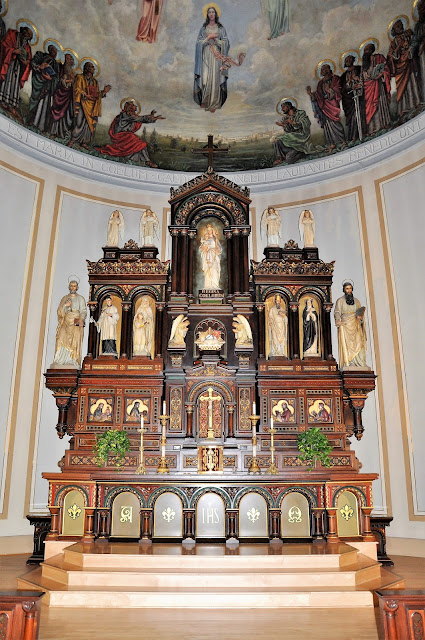 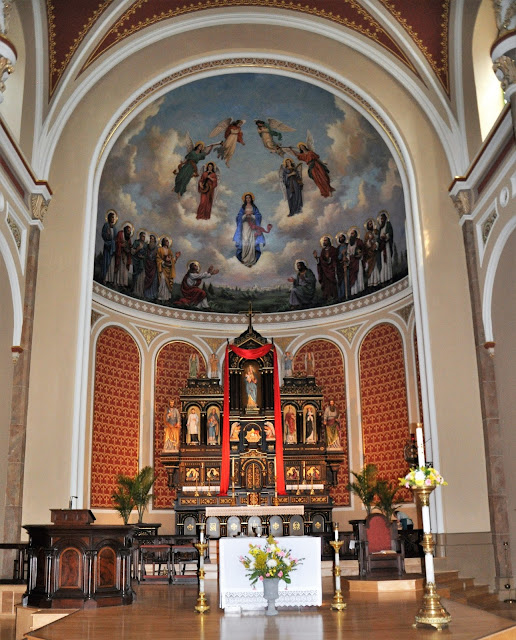 Don't get me wrong.  I am a huge fan of Conrad Schmitt Studios.  They do fine work and I understand they take their orders from the pastor.  However, I am deeply disappointed and disturbed by the recent interior makeover of the Assumption that was completed in 2017.

This was my childhood parish.  Built in the 1870s.  The Sonnen family has been involved here since before the current church was built.  Our family weddings and funerals have been here.

A common recurring nightmare I have had in recent years is waking up and seeing the interior of this church harmed.

Unfortunately, the interior has been painted as if it is a new church.  None of the statues needed to be touched.  Everything is too dark.

The Latin quote from the breviary: "Assumpta Est Maria in Coelum" (see top photo) was painted over.  Why?  Is there still an animus against Latin?  Why?

Also, the new, dark stencil work in the sanctuary takes away from the altar, which is supposed to be showcased properly, as it was before.  Why did they not restore the original stencil work of the stars in the blue ceiling?  That would have been a nice touch.

The original structural form of the sanctuary was "wreckovated" in the mid-1980s under former pastor Fr. Fred Mertz (who died in 2010).  I would like to have seen the sanctuary floor-plan restored according to the design genius of the original architect.  It was not.

The massive 1980s protrusion of sanctuary floor reaching out to the nave is sloppy, was poorly conceived and is in embarrassingly bad taste (especially considering this is a heritage neo-Romaesque church).

Part of the problem is in the hideous light-colored wood floor that was installed recently.  No one has liked it.  I even preferred the old blue carpet to it.  Also, no one likes the odd CSJ icon that put in the back of the church about ten years ago, replacing the pieta' of our lady, kept in the shadows and folds of that quiet corner.

The sanctuary holy oils aumbry box should also have been restored (it disappeared in recent years --  Bill, please finish your work on it and return it).  And the altar stone should have been placed back in the old high altar (it has been kept in the sacristy vestment closet since the 1980s).

Further items should also have been restored, such as the east entrance confessional that was taken out recently and currently stored in the bell tower.  Also, the original oak crosses, kept today in the original schoolhouse, should have been restored to the Stations of the Cross.  I also think the Pieta' and Good Shepherd statues should also be restored to the front of the church.
at 11:01 AM