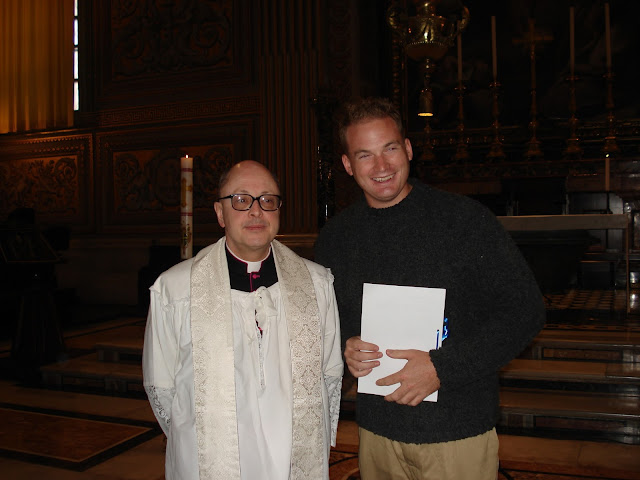 A great theologian, pastor, administrator, bioethicist, liturgy enthusiast and diplomat has passed before us.

He would also want to be remembered as a great pro-life warrior, always quick to defend the rights of preborn humans.  And a lover of all things Catholic, especially the Classical Roman Liturgy.

On Holy Thursday the great Monsignor Ignacio Barreiro Carámbula passed away after a courageous five year battle with cancer.

I am still in a state of shock.  It seems like just yesterday his mother died (she had seen Pius XII on his 1934 trip to South America).  I am almost fearful Monsignor will see this blog post and laugh.

Monsignor Barreiro was a close friend and a devoted follower of this blog.  My first Traditional Mass in Rome was with him at Santa Maria della Pace in Trastevere in 1998.

I later attended his Sunday Mass at San Giuseppe Capo le Case, near the Spanish Steps.

Monsignor had been a diplomat in the foreign service of Uruguay for some years until he was forced into exile after a coup d'état of his government.

After working at the U.N., he entered the seminary in New York and was ordained priest in 1987 by John Card. O'Connor at St. Patrick's Cathedral in NYC.

In 1998 Monsignor did something great for the Church when he opened the wonderful Rome office of Human Life International - a beacon of light - which is still in operation today.

As a graduate student in Rome, I frequented his office where he had established a wonderful library and study room for students.  Most of the books were in English and covered various subjects, including bioethics and morals.

There was always a stack of The Latin Mass Magazine, which he was a contributor.

I always enjoyed a visit.  When his office door was open, it meant you could say hi.  When it was closed, you knew he was busy.  Some days, the entire office was full of cigar smoke, which reminded us of the South America of his youth in the 1940s.

At noon Monsignor was fond of inviting all those present into his office to pray together the Angelus.

The wall behind his desk, jokingly called the "wall of fame," was covered in his diplomas and awards, including his two doctorates, the one in the center a doctorate in theology from the Pontifical University of the Holy Cross.  Another framed document was his membership in the Confraternity of St. Peter and another his being named a prelate of honor during the reign of John Paul II.

Once on a train ride into Rome, Monsignor joked that he belonged to a South American diocese he had never been to.  We all laughed.

Over the years Monsignor helped a lot of people.  His greatest gift was sound advice, prudence and action.  Sometimes this meant counseling young couples, or mentoring lonely expats.  He was always lending a friendly hand to help those in need.  Once he even paid for a mutual friend's dental bill.

Greatly devoted to the Traditional Latin Mass, he was not well coordinated in the sanctuary.  However, he was brilliant and his sermons, delivered in Italian, were stirring and delivered with great gusto and interesting collocation.

Oh, how I will miss seeing him walking the streets of Rome in his cassock and rain coat, wearing his cap, carrying his umbrella and looking out from those thick glasses.  He was the only priest I saw at every pro-life event.

A friend of popes, cardinals, bishops, priests, nuns, the laity, students, the unborn, the Latin Mass movement and all in need of help, may this great man rest in peace.  Hopefully one day he will be canonized and declared a patron saint of the unborn and of graduate students in Rome.
at 12:48 PM