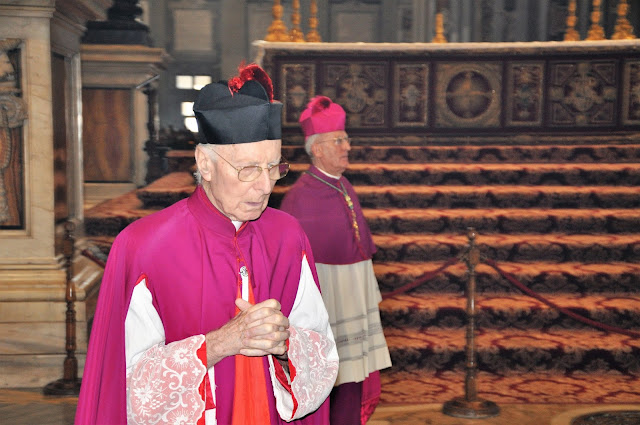 One of the last great theologians and Roman professors has passed.  May his memory be eternal!

He was also a dear friend.  His spoken Italian was perfect Florentine!

I will miss seeing the great Mons. Gherardini at various events in Rome and the Vatican.  Sometimes, early in the morning, I would see him walk around the Vatican walls for exercise, always wearing his Roman cassock.

He was very gentle and quiet.  He really shined in the Roman aula, teaching in front of students.

Many will remember him as the postulator for the cause of Blessed Pius IX.  For others he was their beloved professor at the Lateran.  Others will remember him best as a canon of St. Peter's where he sang Vespers every Sunday.

He was an imposing figure, tall and slim.  He always walked with purpose and direction and had a quick and big smile.

The annual evening Mass at the tomb of Blessed Pius IX on February 7 was organized by him.  This was a tremendous contribution.  It was the only time of the year when pilgrims could enter and touch the tomb.

This saintly priest wrote over eighty books on theological subjects.  Ordained priest in 1948, he studied in Rome during the good old days under the pontificate of Venerable Pius XII, of blessed memory.

He was a good and faithful friend to Cardinal Ratzinger, Pope Benedict XVI.  Being in the Ratzinger camp, he paid a heavy price among the wolves.  His greatest achievement was to be an an orthodox and loyal son of Holy Mother Church during a time of tempest and rebellion.

God gave this great man 92 years to do His work on the planet earth.  The torch hath been passed to a new generation.  May new youthful theologians pick up where he left off and be great theologians, loyal to safeguarding and protecting the sacred deposit of Faith even unto persecution, calumny and death.