A Great Custom for Your Parish: Tenebrae Cards 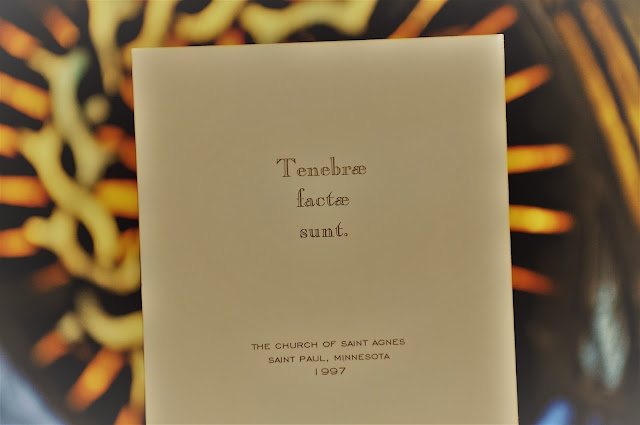 I will always be grateful to Fr. Z for these nice cards.  He started this tradition at St. Agnes church back in the day.

Each Passiontide, he had these nice little commemorative holy cards printed and distributed to each participant who sang Tenebrae.  Everyone was grateful, including the visitors, who came from everywhere.  I remember one year we had a Latinist monsignor visiting from the Congo.

It was nice to have this little memento and to collect them.  This one is from 20 years ago! The service made a great impression.  My favorite part was at the end on Good Friday when everyone would close their Liber and slam it against the kneeler to make a jolting "BANG" sound, called the strepitus, a harsh sound indicating the closing of the tomb and consequent earthquake when Christ died on the cross.

The cards also made fine bookmarks in the Liber Usualis.  In those days I always reached for the old Liber of Monsignor Bandas, who had passed in 1969.  His was full of these cards and others from previous years.

When I return to St. Agnes now these many years later, I find crystal drops quivering at the ends of my lashes.  It is with great emotion I return to thank the Lord in heaven for what I was bequeathed at St. Agnes - the liturgical praxis of the Roman rite, the glory and splendor of sacred liturgy, in the Viennese tradition.  A rare privilege in an aliturgical world.
at 11:19 AM