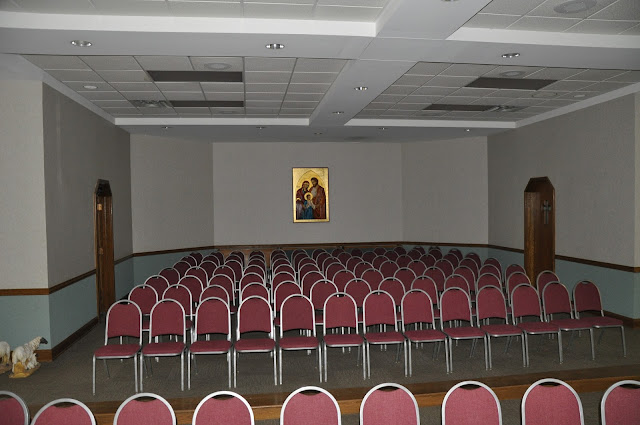 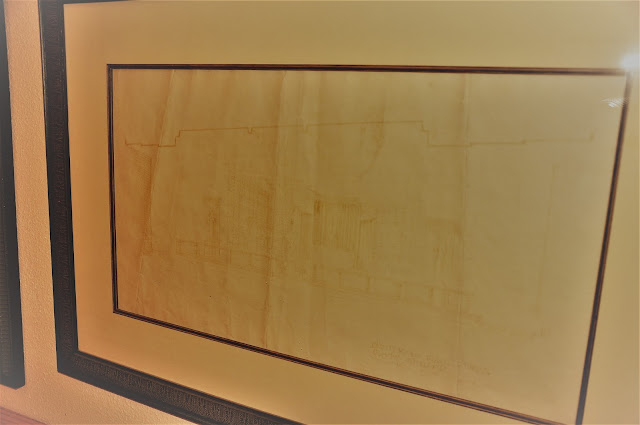 The first known permanent altar constructed "facing the people" in the United States is believed to have been here.

In 1938, an unthinkable thing was done in this crypt chapel, located in the basement of the newly constructed Nativity Church in St. Paul, Minnesota.  A new altar was constructed and consecrated in 1939 during the April church dedication.  It was built "facing the people."

The Archbishop who permitted this, John Gregory Murray, sometimes celebrated Mass facing the people on a table altar placed in the sanctuary of the chapel of Thomas Aquinas, located on the campus of the College of St. Thomas and St. Thomas Military Academy.  This is evidenced in old yearbook photos from the period.

In the top photo you can see how the lower chapel at Nativity appears today.  In the lower photo, is the original architectural print, today hanging in the upstairs (former) baptistry of the church.

Sometime in the 1970s, the chapel was totally wreckovated,  no doubt "in the name of Vatican II," or some such rubbish.  It would be nice to see the chapel restored.  In the 1950s, this parish was so bursting with families that Midnight Mass was celebrated simultaneously in the upstairs and downstairs church.

I would urge the current pastor to put the word out seeking old wedding photographs from aging parishioners, in the hopes of putting together the missing pieces of the puzzle, before even those photos are dispersed and gone forever.

Nativity was ahead of its time.  Here is an article which appeared in the 1939 church dedication booklet, explaining the arrangement of the lower altar facing the people.  I suspect this was penned by a Benedictine from St. John's Abbey in Minnesota; not everything it says is exactly correct.  It reads:

"Parishioners will probably be surprised when they see the altar in the downstairs church.  There is nothing unusual about it except that it faces in a direction exactly opposite to that which we are accustomed to.  When Mass is said the priest faces the congregation all the time instead of only at intervals, as is the usual case.

There really is nothing very unusual about it, however.  In any church the altar may be made to face in either direction.  It may be so placed that the priest has his back to the faithful and must, therefore, turn about when he says Dominus vobiscum, Oratre fratres and other similar prayers; or it may be placed so that he has no need ever to turn about, as is the case in the downstairs church.

The first manner is the usual practice throughout the western Catholic world today.  The oldest manner, however, was to place the altar free from the wall and facing the congregation.  That custom, it must be said, was not absolutely universal in the early Church, because sometimes circumstances demanded another, as when there was not sufficient room for the priest to stand behind the altar; such frequently happened in the catacombs and more frequently with chapel altars.

That is the usual custom for a great many centuries is evident from several things.  First, that the bishop has his throne in the apse where the altar now commonly stands; second, that the rubrics for incensing the altar supposed that the priest walked completely around it; and third, that the place where the subdeacon stood at a solemn Mass was on the other side of the altar, facing the celebrant, and not behind the deacon as is the case today.

It is impossible to say just how many churches in the early centuries had their altars like the one in our downstairs church.  It is possible, according to the great work of Joseph Braun, Der Christliche Altar, to say that in the three cases it always faced the people.  First, in cathedrals where the throne of the bishop made it necessary.  Second, in those churches where relics of saints were kept in the altar front.  In this case the altar was placed so the faithful could venerate the relics without entering the sanctuary and, therefore, the altar had to be close to the communion railing and to face the people in church.  Third, when the church itself faced west, then the priest must face east and so the altar would have to be placed as it is in our downstairs church.

It was in the ninth century that the custom of placing the altar facing the far wall began to be popular.  In northern countries it became rarer to place relics in the altar and the throne of the bishop got moved around to the side of the sanctuary, where it is now.

Amalar of Metz, writing in the middle of the ninth century, takes this position for granted: "When we say Pax vobiscum or Dominus vobiscum, which is a salutation, we turn towards the people.  We face those whom we salute, except in the case of the salutations before the preface."  After the year 1000 the general rule was to have the altar facing the wall of the sanctuary, as we have it in the upstairs church.

We have, then, in Nativity Church an altar placed facing the people as was quite common for the first thousand years of Christianity and one placed as has become the fashion in the second thousand years of the Church.

Except for Rome and a few places in Germany, and perhaps a few in other countries, altars placed as ours is in the downstairs church are not to be seen.  Rome, which clings so tenaciously to custom, has kept them.  The one on which the Holy Father says Mass in the greatest church in all Christendom, St. Peter's, is placed just as is ours in Nativity Parish; and it is so placed in fourteen other churches in the city of Rome.

The reason for placing it as it is, is clear.  Such direction serves to unite the faithful and the priest more closely in offering the Sacrifice of the Mass.  Recent years have seen great progress made towards the ideal.  Catholics know, today, that they should assist at Mass by following the priest's actions and by associating themselves in the prayers he says.  They know that they are standing about the altar, intimately concerned in all he does and says, and that they are never there merely as bystanders.

In order to hasten such assistance it has often been urged that Massgoers provide themselves with a missal so that they can follow in English what the priest says in Latin.

In addition, it is hoped that the Missa Recitata in the downstairs church will provide us with an object lesson, and that adults will learn from school children how to assist at Mass better.

Members of Nativity Parish should feel proud that they have the first (in these second thousand years) altar facing the people in the United States.  They should also be grateful to their Most Reverend Archbishop, who has granted them permission to have their altar so, and to have the recited Mass.  Without doubt, there is no better way to show gratitude than by actually assisting at Mass more perfectly."
at 5:20 PM