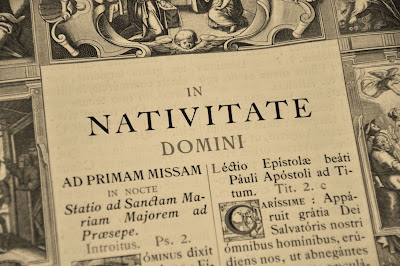 "One night there went out over the stillness of the evening breeze, out over those white chalky hills of Bethlehem, a cry, a gentle cry, the cry of a new born babe.  'The Word became flesh and dwelt amongst us.'  Earth did not hear the cry, for they did not know that a Child could be greater than a man; the sea did not hear the cry, for the sea was filled with its own voice; kings did not hear the cry, for they did not know that a King could be born in a stable; empires did not hear the cry, for only the very simple and the very learned - never the man with one book - know that the heart of a God can cry out in the cry of a Child.  And they came with gifts - and adored, and so great was the majesty seated on the brow of the Child which lay before them, so great was the dignity of the babe, so powerful was the light of those eyes that shone like celestial suns, that they could not help but cry out: 'Emmanuel: God is with us.'  God revealed Himself to men again.  This time He shone through the prism of the Incarnation and brought Divine life to human life.  He who is born without a mother in Heaven is born without a father on earth.  He who made His mother is born of His Mother.  He who made all flesh is born of flesh.  'The bird that built the nest is hatched therein.'  Maker of the sun, under the sun; Moulder of the earth, on the earth; Ineffably Wise, a little Infant.  Filling the world, lying in a manger; ruling the stars, suckling a breast; the mirth of Heaven weeps; God becomes man; Creator a creature.  Rich become poor; Divinity incarnate; Majesty subjugated; Liberty captive; Eternity time; Master a servant, Truth accused; Judge judged; Justice condemned; Lord scourged; Power bound with ropes; King crowned with thorns; Salvation wounded; Life, dead.  'The Eternal Word is dumb.'  Marvel of marvels!  Union of unions!  Three mysterious unions in one: Divinity and humanity; Virginity and fecundity; Faith and the heart of man.  And though we shall live on through eternity, eternity will not be long enough for the us to understand the mystery of that 'Child who was a father and of the mother who was a child.'  For the first time in the history of the redeemed universe is the Divine Life hypostatically bound up with human nature.  That very life of God that passes from Father to Son in the eternal generation of the Trinity, now passes into the world and assumes a human nature like our own, graces it with the plenitude of His Divinity, and gives us that message of hope: 'I am come that you may have life and that in abudndance' - not the physical life which dies, but the spiritual life which endureth unto life everlasting.  Men now began to hear answers to those terrible questions which the Greeks had asked: If God is alone, how is He happy?  If He is one, what does He think about?  If He is alone, whom does He love?  The answer was the Trinity, that inmost life of God, that fullness and fruitfulness of Knowledge and Life which is the sourced of the ineffable bliss of the society of the Three Persons in One God.  And as He who brought the secret of the Trinity walked over the earth seeking for a place to lay His head, while the foxes had their holes and the birds their nests, the world began to understand how much God must love the world when He sent into it His only begotten Son.  And when He told men the story of the prodigal son and taught them to pray thus: 'Our Fatter,' then they realized what a blessed privilege it was to be a brother of Jesus Christ, and a son of the Father.  And finally when men heard a cry ringing out over the muffled sound of steel sinking through sinews and fibers of hands raised only to bless: 'Father, forgive them for they know not what they do,' whey began to understand the worth of a soul.  It was as if the lesson were being driven in their souls like a spear into His heart: the lesson that certainly, in the words of St. Augustine, if a  'man is sufficient for a God, then God ought to be sufficient for man.'"