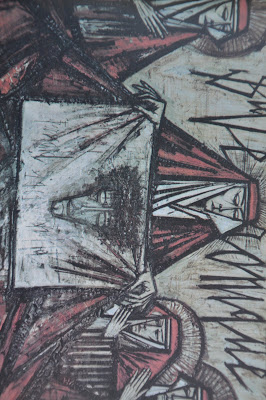 The artist, who scratched his name on the depicted precious veil, is Bernard Buffet, a crazed bisexual "religious artist" who later committed suicide.

Just do a Google search of any of these artists and you will see that something is out of place (i.e. odd Fascists such as Mario Sironi, Ardengo Soffici, Carlo Carrà, or Socialist Aligi Sassu, homoerotic artist Filippo de Pisis, etc.).

Art historians have complained for years that the Vatican Museums has wasted precious space (some 55 rooms, beginning in the historic Borgia apartment) to exhibit some 600-800 such works by contemporary artists, some still living.

This art was big when it hit the scene, but today is worthless.

Time to let the Vatican know that the Vatican Museum's collection of modern religious art can go, taking up space since 1973 to the detriment of more precious works, now locked in the deposits for "lack of space".

One prominent art historian has suggested that it can all be absorbed into the Collezione Paolo VI Arte Contemporanea now kept at the new Centro Studi dell'Istituto Paolo VI located at Concesio, near Milan: http://www.collezionepaolovi.it/collezione-paolo-vi.asp.

And to the brass of the Vatican Museums: many thanks for having taken away earlier this year the large and offensive painting at the entrance of the Borgia apartment of the depressed business man crucified as Christ on the cross.
at 1:32 AM