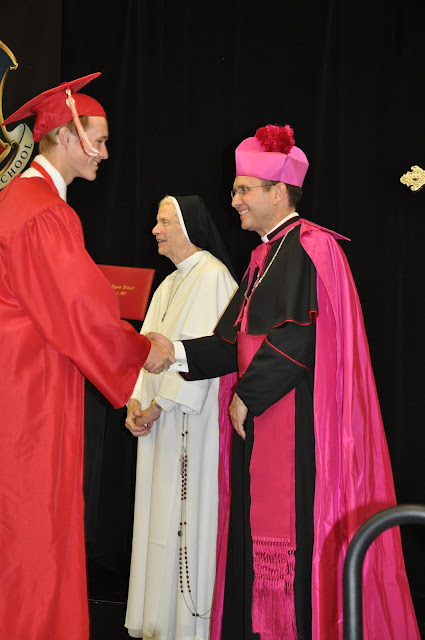 It was sheer delight to attend graduation exercises at my old alma mater, Saint Agnes High School in St. Paul, Minnesota.  St. Agnes was the first co-educational Catholic high school in the city of St. Paul and in the Twin Cities (the school comprises of grades K-12).

The current campus, dedicated in 1940 (with an addition in 1953), holds many memories for myself and so many others.  When the new convent was dedicated in 1953, it was constructed to hold 54 nuns!

Today the school is a powerhouse of Catholic education thanks to a very fine pastor, faculty and staff.  Many giants have walked the hallways of St. Agnes and laid the foundation for greatness.

The same grey stone tower with green clock rises high into the sky, a city landmark calling students to St. Agnes, venerable and dignified in its verdigris pinnacle, surmounted with a golden cross.

Here is an interesting clip from The Wanderer (June 6, 1940), recounting the striking features of the dedication of the new school:

"Several thousand men, women, and children were present at the dedication of the new grade and high school of St. Agnes parish.  Many German Catholics were also present for the annual St. Boniface celebration, which, though usually held at the Cathedral, was held at St. Agnes.  These German Catholics came from many communities; martially they kept step to the tempo of the St. Agnes drum and bugle corps, organized and promoted by the assistant pastor, Father Nicholas Schmitt.  The most Reverend Archbishop, visiting pastors from parishes throughout the city, and civic officials heard Reverend Lambert Hoffman deliver the sermon for the occasion.  After the Archbishop had blessed the school and had hung the first crucifix in one of the classrooms, the group moved into the dining hall in the new school.  Mr. Michael Ettel, the toastmaster, introduced the speakers at the banquet: the most Reverent Archbishop Murray, Father Gruden, Mayor McDonough, and Mr. Joseph Matt.

Then the St. Boniface celebration began with a parade from the western section to the church.  At the church German hymns were sung.  Archbishop Murray preached the sermon for the occasion.  His Excellency called attention to the dangers confronting the entire world because of the catastrophe in Europe.  Catholics must erect moral barriers to stem the vices of impending social upheavals.  German Catholics can learn much from the life of St. Boniface.  At the civic program in the auditorium over one thousand persons listened to the speakers of the day: Father Gruden, Messrs. Matt, Ettel, and Aretz."
at 12:46 PM