In Memoriam: King Louis XVI of France Last Will and Testament 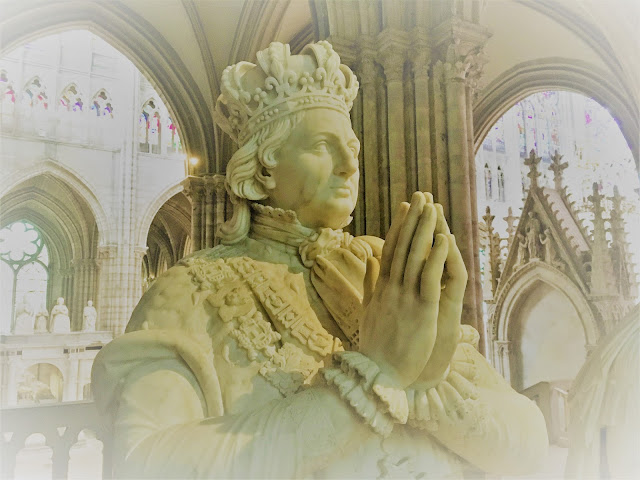 Louis XVI came to power after the death of his grandfather, Louis XV, in 1775. Louis XVI’s reign was marked by attempts to reform France in accordance with Enlightenment ideals and a financial crisis that contributed to discontent among France’s middle and lower classes. This discontent eventually culminated in revolution with  Louis XVI’s reign ending on August 10, 1792. A few days later he was imprisoned at the Temple with his family. The National Convention eventually tried him for high treason, found him guilty, and sentenced him to death. Prior to his execution by guillotine on 21 January 1793, he wrote his will. It is provided below, almost verbatim:

In the name of the Holy Trinity, the Father, Son and Holy Ghost; This Day, the 25th day of Dec. 1792, I, Louis, the XVIth of that name, King of France, having been for more than Four Months shut up with my Family in the Tower of the Temple at Paris, by those who were my Subjects, and deprived of every kind of communication with my Family since the 11th of this month; and being moreover involved in a Trial, of which, from the passions of Mankind it is impossible to foresee the event, and for which neither pretext nor precedent can be found in any existing Law; having no Witness of my thoughts but God, and no one but Him to whom I can address myself, I here declare, in His presence, my last Will and Sentiments. I leave my soul to God, my Creator. I entreat him in mercy to receive it, and not to judge it according to its defects, but according to those of our Lord Jesus Christ, who offered himself up a sacrifice to God, his father, for us men, however, hardened we might be, and confess myself to be among the first.

I pity with all my heart, our brethren who may be in error; but I presume not to judge them, nor do I love them less in Jesus Christ, agreeable to the instructions of Christian charity. I pray God to pardon all my sins which I have endeavoured scrupulously to recollect; and I detest and humiliate myself in his presence. Deprived of the assistance of a Catholic Priest, I entreat of God to receive the confession which I have made to him, and particularly my profound repentance of having signed my name, although strongly against my will, to instruments which may be contrary to the faith and discipline of the Catholic Church, to which I have in my heart continued sincerely attached. I pray God to receive my firm resolution, should he grant me life, to avail myself, as soon as I can, of the Ministry of a Catholic Priest, to confess all my sins, & to receive the sacrament of repentance.

I beseech all those whom by inadvertence I may have offended (for I do not recollect ever knowingly to have committed an offence against any one), or those to whom I  may have given a bad example, or occasion for scandal, to pardon me the evil which they think I may have done them.

I beseech all those who have Charity to unite their Prayers to my own, to obtain from God the pardon of my Sins. I pardon, with my whole heart, those who have made themselves my enemies, without my having given them any cause; and I pray to God, that he will pardon them, as well as those who, by a false zeal, or by a zeal ill-understood, having done me much evil.

I commend to God, my Wife, my Children, my Sister, my Aunts, my Brothers, and all those who are attached to me by the ties of Blood, or in any other manner whatsoever. I especially implore God to cast the Eyes of his Mercy upon my Wife, my Children, and my Sister, who have for so long a time suffered with me—to support them by his Grace, should they happen to lose me, so long as they shall remain in this perishable World.

I commend my Children to my Wife: I have never doubted her maternal tenderness for them. I commend to her to make them good Christians, and honest; to induce them to consider the Grandeurs of this World (should they be condemned to make trial of them) as no other than dangerous and perishable possessions; and to turn their view to the only solid and durable Glory of Eternity.

I beseech my Sister to be pleased to continue her tenderness to my Children, and to supply to them the place of a Mother, should they have the misfortune to lose their own.

I beseech my Wife to forgive all those evils which she suffers for me, and the uneasiness which I may have given her in the course of our union; as she may be assured, that I retain nothing in my mind respecting her, should she imagine that she has any reason to reproach herself with respect to me. I earnestly recommended to my Children, after what they owe to God, which they ought to consider as prior to every thing else, to remain always united among themselves, submissive and obedient to their Mother, and grateful to her for all the pains she takes for them, and in memory of me. I beseech them to consider my Sister as a second Mother.

I recommend to my Son, should he have the misfortune to become a King, to reflect that he owes himself entirely to the happiness of his Fellow-Citizens; that he ought to forget all hatred and resentment, and especially all which has a reference to the misfortune and miseries which I experience; that he cannot effect the happiness of his People, but by reigning according to the Laws; but that, at the same time, a King cannot make those respected, or do the good which is in his heart, unless he possess the necessary authority; and that otherwise being confined in his operations, & commanding no respect, he is more hurtful than useful.

I commend to the care of my son, all those persons, who were attached to me, as far as his circumstances permit; and to consider this as a sacred debt contracted by me towards the children or relations of those who have perished in my behalf, and those also who are rendered miserable on my account. I know there are several persons who were attached to me, that have not conducted themselves as they ought, and who have even been ungrateful, but I pardon them (in moments of disorder the imagination is heated, and we are sometimes not masters of ourselves). I request my son would only consider this distress.

I wish it were in my power to prove here my grateful acknowledgments to those who have testified towards me a sincere and disinterested attachment. If on the one hand I have been deeply afflicted at the ingratitude and disloyalty of those whom I have constantly distinguished by favours, I have on the other hand had the consolation to experience the attachment and voluntary interest of many in my favour. I entreat these to accept my warmest acknowledgements.

In the present state of affairs, I should be fearful of involving my friends in embarrassments, were I to speak more explicitly; but I most earnestly enjoin my son to embrace every opportunity of finding them out.

I should, however, conceive, that I calumniated the sentiments of the nation, were I not openly to recommend to my son Messrs. de Chamilly and Hue, whose sincere attachment to me has induced them to shut themselves up with me in this sorrowful abode, and who have been in danger of becoming the unhappy victims of that attachment. I also commend to him Clery, with whose attention I have every reason to be satisfied since he has been with me, as he is the person who has remained with me to the end. I beseech the gentlemen of the Commons to deliver to him my effects, my books, my watch, and the other little articles of my property, which have been deposited with the Council of the Commons.

I pardon also most heartily those who guarded me, the ill-usage and restraint which they thought it their duty to adopt towards me. I have found some tender and compassionate friends; may they enjoy in their hearts that tranquility which their mode of thinking always bestows.

I request Messrs. Malsherbes, Tronchet, and de Seze, to receive my utmost acknowledgements and expression of gratitude, for the care and anxieties they have sustained on my account.

I conclude by declaring before God, and at the eve of appearing before him, that I reproach no one with the crimes they have committed against me.